Six Easy Ways to Keep Scorpions Away from Your Fayetteville Property

In the film Indiana Jones and The Crystal Skull, Indy and his protégé Mutt Lang encounter scorpions while venturing into a graveyard cave.

Mutt says, "I just got stung by a scorpion."

To which Mutt replies, "It was huge."

Indy explains, "When it comes to scorpions, the bigger, the better. If a small one bites you, don't keep it to yourself."

And so goes the idea that the smaller the scorpion, the more dangerous it is. Well, this is relatively true. Smaller scorpions don't have control of how much venom they release, so they tend to inject you with all they have. The big ones are less likely to do so. Find out more about scorpions in Fayetteville. 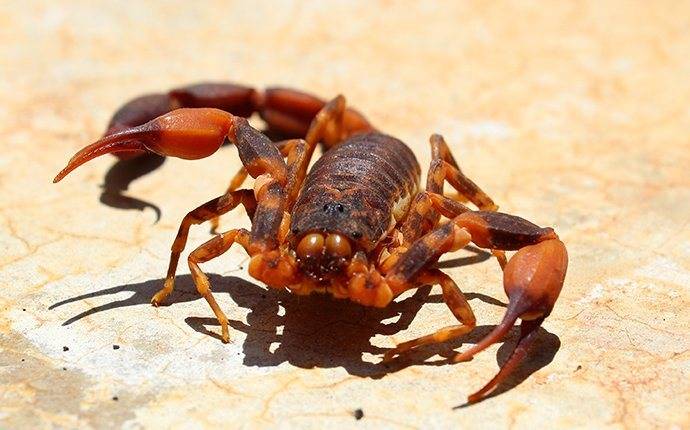 Scorpions of the Southeast

Luckily for those of us living in the Carolina's, we only really need to worry about two species of scorpion: the southern devil scorpion (Vaejovis carolinianus) and the striped bark scorpion (Centruroides vittatus). Neither of these pests has potent enough venom in its sting to be fatal. However, some people are allergic to them and might need medical attention right after being stung. The good thing about the scorpions we find in our part of the world is that they seldom do sting, and we rarely see them, but they are still unwelcome pests around our homes.

The southern devil and striped bark scorpions can reach a size of about 2 ½ to 3 inches in length and are black, brown, or grey in color. They are easy to recognize due to the large pinchers on either arm and the scary stinger on the tip of their long, narrow tail, which is used for defense, matting, or killing prey. Most scorpions are nocturnal and will only be active after sunset.

The female scorpion is much like the female spider when it comes to taking care of its offspring. She gives birth to around 25-80 live young, which then climb onto her back and remain there until after the first molt. However, unlike a spider, if the female gets hungry, she will eat their young.

Scorpions are usually found outdoors, living in the loose bark of trees, under logs, in woodpiles, crumbling stone, brick foundations, and under rocks on the ground. But they may survive and even thrive indoors if they find suitable prey. They will prefer areas that tend to be moist or humid, such as bathrooms, kitchens, or laundry rooms.

Controlling Scorpions Around Your Fayetteville Home

Controlling scorpions and keeping them from living in or entering your home is pretty straightforward. You don't want any detritus near occupied buildings, so remove old boards, cardboard, loose rocks, woodpiles, old mattresses, and other debris. The use of caulking to close small cracks where pests might gain entry to your home is a tremendous defensive maneuver. You want to pay extra attention to areas with water pipes, cables, and other wall outlets or fittings. Having door sweeps to close off the space between the bottom of the door and the floor is another great idea.

By taking preventative measures, you are keeping the scorpion from living near or entering your home and controlling the pests they feed on from coming inside. They are commonly known to eat spiders, centipedes, millipedes, other insects, and even small reptiles.

The last and most effective tip to controlling scorpions is to have ongoing service from a professional pest control company like Ennis Exterminating. Reach out to us today to learn more about how we can keep scorpions off of your Fayetteville property.

Complete the for below to schedule your inspection with Ennis Exterminating

We've relied on Ennis Exterminating for many, many years for our termite and pest control. In this day of mega-companies and call centers, it's nice to pick up the phone and actually talk to the owner of this family-run business. Any need we have is always taken care of immediately. Friendly, honest folks. I like them a lot.